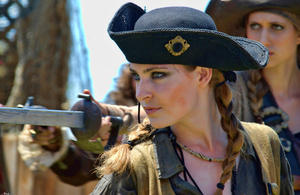 Part of the Pirates unit. This study unit allows students to investigate the key question “How useful is the film ‘Pirates of the Caribbean’ to historians investigating the ‘Golden Age’ of Piracy? An interactive strategy game forms the hub of the unit, with students investigating the following key elements prior to writing a detailed written report at the end of the study:
How accurate is the use of weaponry in the film?
How far is Jack Sparrow based on real Caribbean Pirates?
To what extent are genuine Pirate Codes reflected in the film?
How accurately does the film depict genuine pirate myths such as Davy Jones and the Flying Dutchman?