The Z-A quiz format involves revealing a series of words or phrases, letter by letter, in reverse alphabetical order.

Students, organised into teams, win points if they are the first to identify what all the words/phrases have in common.

As soon as a hand is raised, the teacher ‘stops the clock’ to hear the answer.

If the team answers incorrectly, it is frozen out of further play and the game resumes.

The format is used in Richard Osman’s House of Games on BBC TV.

Based on this game, I have coded a simple Z-A quiz generator at ClassTools.net to enable students and teachers to quickly generate their own Z-A quizzes.

Case Study: The Origins of the Cold War

In the sample game provided freely on www.classtools.net on the Origins of the Cold War, the first set of terms is Winston Churchill, Franklin Roosevelt, Harry Truman and Josef Stalin. The students might identify them all as leaders of key states at the end of World War One (2 points for ‘something in common’). Another team may have played though for three points with “Stalin was the only one who didn’t speak English”. If you are playing the version of the game where each team is challenged to identify such a connection and the teacher judges the most sophisticated, another team might trump this by saying instead “Stalin was the only one who wasn’t at least half-American” or “Stalin was the only one who attended both the Yalta and Potsdam conferences from start to finish”). It’s up to the teacher (or a special team of student adjudicators!) to decide which of these is the most useful/sophisticated points when deciding who to judge the winner! 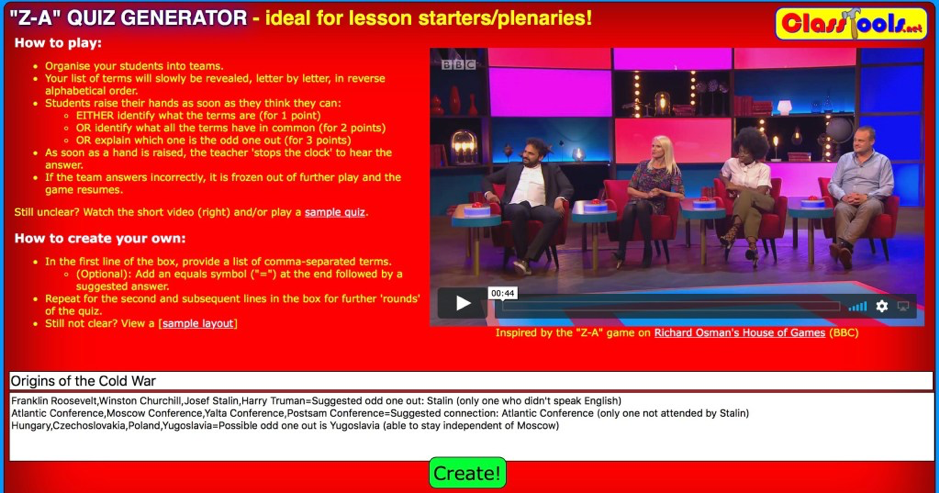 To add further interest to the game, the rules can be developed by rewarding students when they:

If a team successfully for only one or two points, the clock can be started again to allow teams to try to score by aiming for the remaining (higher-scoring) options. So for example, Team 1 might successfully identify what the words are (1 point); Team 2 might then a few seconds later ‘buzz in’ to say what they all have in common (2 points); and then either team might buzz in a little later to identify which one is the odd one out (3 points).

Another format could be as follows: the first team to correctly identify what the words/phrases are gets a point. With the terms now identified, all the teams are challenged to identify the most impressive explanation of what they have in common. The teacher judges the winner and awards a point accordingly. Finally, all the teams are challenged to produce the most impressive explanation as to which one is the odd one out, with the teacher again judging the winner and awarding points.

The game can be played over several rounds with different terms on the same topic being used.