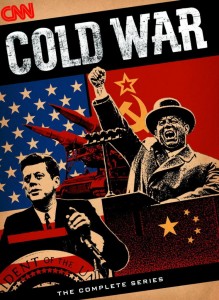 The first half of the 20th century was dominated by the “European Civil War” of 1914-45, which left the continent broken and exhausted.
The second half of the century was characterised by the “Cold War” between the two superpowers who emerged from the wreckage: the USSR and the USA.
Neither side directly declared war on the other at any point during this period, but there were violent “hot spots” in places like Berlin, Korea, Cuba and Vietnam which meant that World War Three was seen by many as an inevitability.
Paradoxically, the “Cold War” was perhaps even more “total” a conflict than the World Wars which preceded it; earlier conflicts were intense, but clearly defined chronologically and geographically. The Cold War, though, had no clear parameters: it was a clash of ideologies as much as nations, with no clear beginning or end, with a whole generation growing up with the grim expectation that their world would end in a nuclear holocaust.