This short, simple but effective exercise (requiring nothing more than some drinking straws) helps students understand about the limits of co-operation, the dangers of unbridled rivalry and the importance of co-operation. In this sense it can be used in a variety of contexts but I personally use it to provoke a discussion about the reasons for the failure to control arms proliferation between the two World Wars.

Create two teams of four people, and have each group face the other in a neat row. Provide each of the two teams with a very light object – ideal is some drinking straws connected together with a little sellotape. The object needs to be placed in front of them so that it is resting on two fingers from each student, one from each hand, at shoulder height:

Start by challenging the team to simply keep the object steady without a single figure losing contact with the object. Even this is surprisingly difficult: the act of maintaining contact by applying gentle pressure can lead to the straw delicately rising, which in turn forces other members of the team to compensate until the straw quickly rises uncontrollably over their heads.

After a minute or two of practice, introduce the team competition: Each group is racing the other to be the first to successfully lower their straw to the floor, but without any of the fingers losing contact with it. Appoint other students to monitor each team carefully. As soon as any one finger loses contact, the group has to return the object to its original shoulder height and start again. The winning team is the one that has lowered the object the furthest in two minutes.

The task is fiendishly tricky. Even with all members of the team co-operating, it is impossible for all four members to move their hands downwards at exactly the same pace. As a result, fingers will inevitably get detached from the object and the process will never be completed. But what can this process be used to illustrate?

Analogy [1]: Working as a team – World Disarmament after World War One

After a few minutes playing the game, pause the students in each group and ask them to imagine that each of them represented one country, and that the straw under their fingers represented their national armaments. With this in mind, what were we clearly trying to do? Hopefully they can be guided towards the idea that the objective of lowering the straw without anyone losing contact with it represented an attempt to organise a disarmament treaty between them in such a way that no country ever felt exposed by disarming itself at a quicker rate than the others.

With this point made clear, ask them why the task was so difficult, even when all members of the team were in favour of the overall objective and wanted to work with the others to make it work. Issues such as a lack of communication, an ill-considered strategy, and sheer impossibility might be raised. The following clip is a nice one to use in this context:

Analogy [2]: Working in rivalry – the Arms Race before World War One

At this point, highlight to students that so far the task has involved working together as a team towards a common outcome: but how much more difficult would it be if, as was the case prior to World War One, nations such as Germany and Britain were concerned with maintaining or establishing a military edge over each other rather than reducing their armaments?

To simulate this new situation, state that this time there individual (not group) prizes will be awarded to the winners. The first member of the team whose finger loses contact with the straws will be eliminated from the competition. This process will be repeated until just two people are left with the straw, and these people will have the prize split between them (this is because with just two people involved, co-ordination of the straw becomes child’s play).

What often happens in this phase is a striking visual metaphor for an arms race: each student has a vested interested in maintaining contact with the straw rather than even trying to lower it; as a result, the pressure collectively applied starts to send the straw skyward with almost exponential speed and mutual recrimination. This state of affairs can be provoked further by stating that if the straw is dropped, or if it goes above shoulder height, then the entire team loses.

As an essential follow-up exercise, students will need to use their background knowledge to produce an answer explaining why attempts to control the arms race before World War One (e.g. the Hague Conferences of 1899 and 1907, Churchill’s proposed ‘Naval Holiday’ in 1909, the Haldane Mission 1912) failed to achieve their objectives, as did the World Disarmament Conferences in the interwar period.

I’ve adapted this activity for a historical context after used seeing @natkin demonstrating the difficulties of lowering the straw at the @pedagogies conference at the International School of Toulouse in October 2016 in his workshop “Developing Better Learners”: 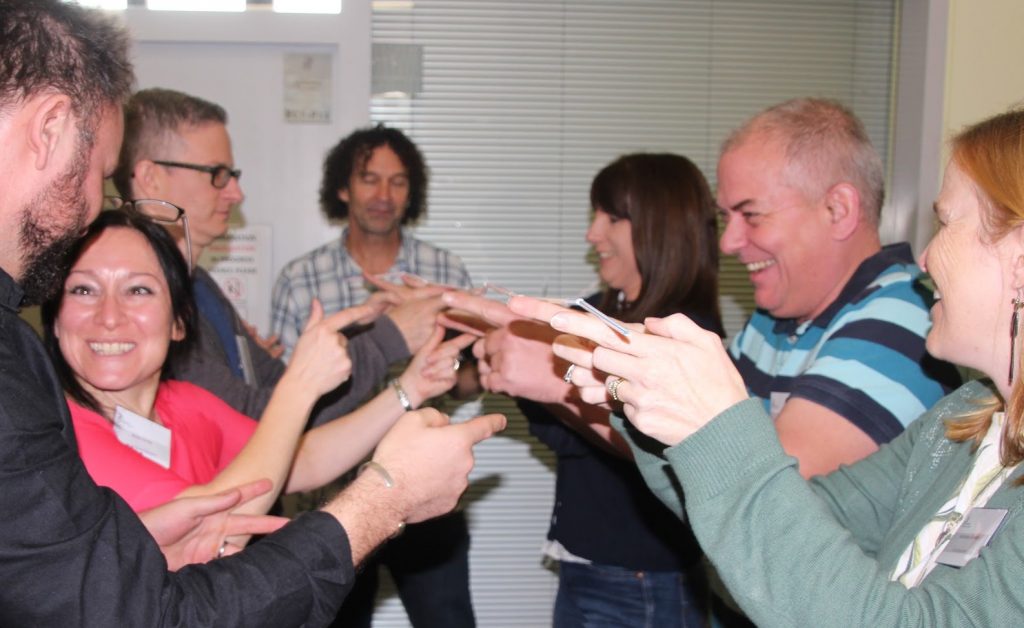