The names given to our roads and streets provides a rich source of potential for local history projects. Students can research the events and people commemorated in these names to engage in some open-ended history that is not constrained by a particular topic, theme or period. The following example uses Google Maps to make this an interactive, collaborative project, but there is no reason why paper-based maps could not be used instead.

Begin by getting each one of your students to add a placemark over the town or village nearest to where they live. The outermost placemarks represent the perimeter of our investigation (although we don’t need to be too strict about this).

Next, putting your students into teams and challenge each of them to start looking for any streets named after individuals. They should start in their localities, then work outwards, within the perimeter set earlier.

Each time they spot such a street, they need to add a placemark, then tell you when they have done so. If you agree this is a valid “hit” they win a point for their team.

This process can continue until ideas start to run dry. 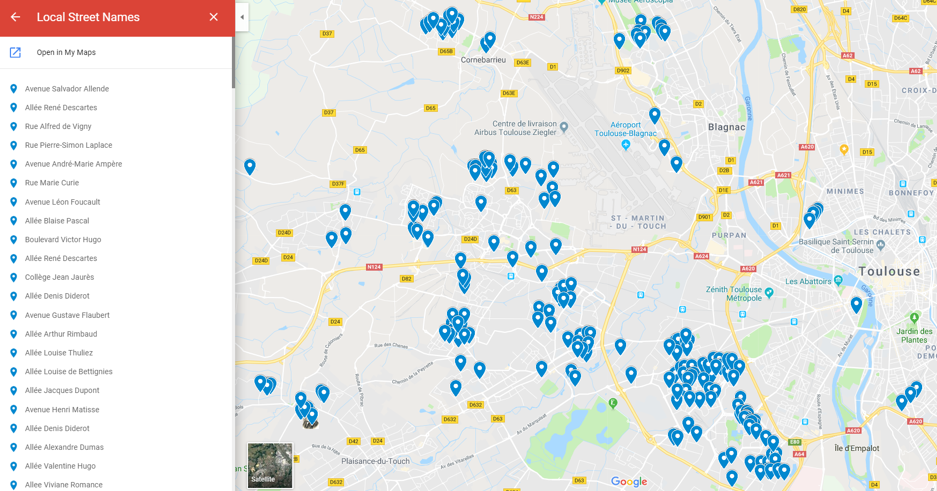 Award two team points every time a student successfully spots a street named after women (who are traditionally under-represented).

Award three team points for the first team to successfully locate the street whose name is the answer to a quiz question (e.g. “This street in Blagnac is named after a famous French philosopher who wrote a book called ‘The Meditations’”). This will involve a Google Search to identify the person in question, then a search of Google Maps for that name to locate the correct street. This is a good way to ensure some of the most notable characters are successfully incorporated. Alternatively, divide this list of quiz questions between the teams so they are not in competition with each other, and leave them to decide how many of these bonus questions they wish to focus on.

Stage 2: Researching the story behind each street name

Once the class has identified at least as many places as there are people in the class, divide the list between all the students and challenge them to research the person or people they have been allocated. A “two sentence summary” can be produced, then each placemark on the map can then be edited to include this information, and even an image of the person.

Stage 3: Sharing the findings through a balloon debate

Once the collaborative map has been completed, each team should be given time to examine it at their own pace and choose one character to focus on in more detail. This could then lead into a balloon debate, or form the basis of a classroom campaign where the teacher asks them to imagine that a new statue is going to be raised in the town centre to commemorate the most significant and heroic of all the individuals: each team will make their case and the teacher will then judge.

A second wave of research, perhaps later in the year, could revisit the map but focusing this time on streets named after key events rather than individuals.

The research could be laminated and attached to some of these actual street signs in the local area to help educate the community about the history all around them.

Interesting discussions could take place following completion of the map, such as