One important literacy skill is for students to use (and, increasingly, to spot) writing which is designed to persuade rather than merely inform. To do this, get students to produce a list of biased adjectives and then set up  quick-fire competition: each member of the class has to take it in turns to contribute a fresh word to the shared list without hesitation or repetition. Students failing to do so have to sit down, with the overall winner being the last person left standing. The pool of words can then be left on the board for students to draw from in their written piece.

At the end of a detailed study of why William of Normandy won the Battle of Hastings in 1066, I ask students to take a basic written account of the event and transform it into a biased newspaper report. The account they are given as a starting point is written in a dry present-tense format. In Stage 1 of the activity, students first use their word processors to convert this into one neat paragraph of text – using punctuation and linkage words as appropriate to make the narrative ‘flow’. They might end up with something like this (past tense highlighted in red, linkage words in blue):

In Stage 2, they are put into two teams (Anglo-Saxons and Normans) ready to insert some bias into the narrative: “good” words about their favoured ruler, “bad” words about his enemy, and asked to start constructing a list of positive and negative adjectives:

Group A: An Anglo-Saxon newspaper. This will see the defeat of Harold as a terrible disaster. It will talk about how brilliant Harold was, and how William was cruel, evil, and only won because of luck.
Group B: A Norman newspaper. This will see William’s victory as a good thing. It was talk about how evil and stupid Harold was, and say that William was clever and deserved the throne all along.

At this point, students are told how the game will work. Each student will be given five minutes to produce a list of positive adjectives, then a further couple of minutes to memorise as many of them as possible. Then, the whole class stands up and the teacher makes it clear who will start by giving the first word, and then the order that other students will follow (it therefore helps to have students standing in a ring as far as this is possible). The teacher then invites the first person to start. The teacher repeats the word, writes it on the board, and then points to the next person to continue. Any student who hesitates, or repeats a word already on the board, has to sit down. Repeat the process until there is one overall winner left standing.

Then, immediately move to round two (the “bad” words). This time, start with the person who came last in the ‘ring’ in the previous round, and work around the group in the opposite direction, to keep things fair.

At the end of the process, students will be left with a list of useful words to make use of in their final piece of persuasive writing, both positive and negative.

As well as incorporating adjectives, more able students could add adverbs too. A final piece of writing making use of the vocabulary from the knockout challenge might look like this (before of course the obligatory adding of images, an alliterative headline, and then some coffee-stain and bake-in-the-oven history goodness): 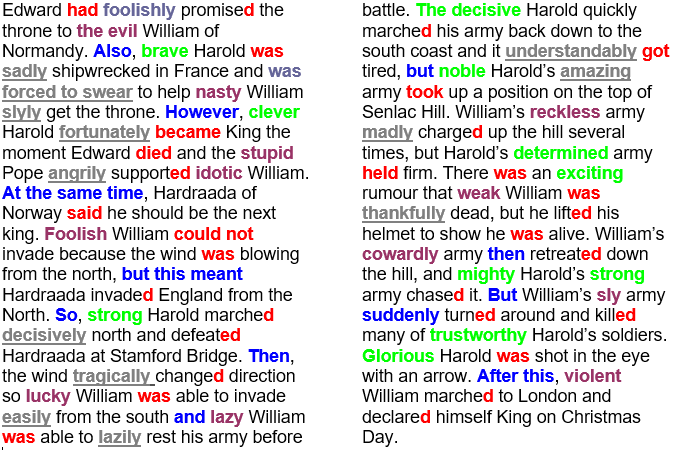