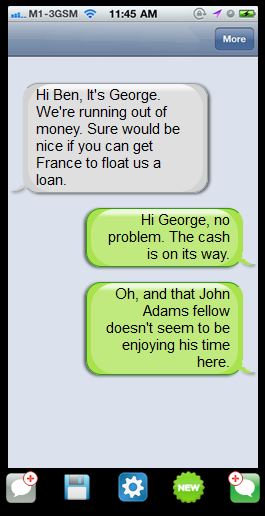 In order to highlight the differing viewpoints of two historical characters, or to consider more closely the relationship between them, produce an imaginary dialogue between them in the form of a text-message conversation.

Start by asking students to identity some of the central dramatic moments within the topic of study, and to identify the two characters most closely associated with opposing viewpoints on this issue (for example, Bukharin and Trotsky could debate the relative merits of the New Economic Policy and War Communism; Lloyd George and Churchill could debate whether Britain should go to war with Germany in 1914). Next, agree upon the key terms, words and events that will need to be included. Students can then proceed to write their dialogue, making sure to include the important historical knowledge as decided.

To help facilitate this approach I have produced a freely accessible web tool (www.classtools.net/SMS) through which students can input their completed dialogue: they simply click on the left or the right of the “phone” on the screen to input a line of dialogue. The computer automatically animates the text and adds sound effects to bring the dialogue alive. The completed conversation can then be saved for future editing, or can be embedded into a website or blog.

This approach works particularly well as a revision exercise, where different students can be allocated different central debates to turn into SMS conversations. These can then be shared with the rest of the class either in paper form or, if produced digitally, as weblinks or QR codes.