This unit, based around an extended decision-making exercise, helps students investigate the causes of the Bolshevik Revolution of October 1917. By so doing they will determine whether it was a popular uprising, or a coup d'etat. They will also decide how important Lenin personally was in precipitating this central 20th Century event.

Study Guide
This document establishes the importance of the topic both at the time and today.

Timeline Roleplay Exercise (interactive exercise using the Online ActiveHistory Presentation).
In this exercise, students are asked to start organising evidence under four headings: (a) Provisional Government mistakes/weaknesses; (b) Bolshevik mistakes/weaknesses; (c) Provisional Government strengths/successes; (d) Bolshevik strengths/successes.
The teacher will use this Online ActiveHistory Presentation to guide students through the key events between February and October. Each slide presents a fresh development, and students discuss and then vote on what they think the relevant party (Provisional Government or Bolsheviks) should do in order to increase their popularity. This is then compared to what really did happen so that students can then determine under which heading they should place their notes.
This is a highly effective and efficient way of getting students engaged with, and reflecting on, the key events in a step-by-step manner as a starting point.

At the appropriate point in the timeline, or as a starter video clip to the next lesson, students could watch this as further information about he decision of the German Kaiser to fund Lenin's return to Russia via Switzerland in a sealed train.

Primary / Secondary Source Material
As the next phase of the investigation, students read through a series of selected primary and secondary accounts of the events of October 1917 and decide where each can be used, and which quotes are best to include. They should also be encouraged to reflect on the values and limitations of each of these sources.

Mind Unit Review: Key Questions to Consider
A simple PowerPoint presentation asking students to reflect on whether they think that Lenin was the 'engine driver' or a 'passenger' of the revolution, and whether this was a coup d'etat or a popular uprising.

Homework Task: Extra notes from video / audio sources
Rather than use video and audio files within the lessons, I prefer to allocate different sources to different students. Their key objective is to make notes on any fresh points of information that they did not know beforehand. Then, back in class, students are placed into small groups in which each member has used a different audio-visual source. They then share their findings with each other to develop their notes appropriately.

Factual Test: February to October (there is also a teacher answer sheet available).
This factual test is provided in the form of a 'gap fill' narrative. In this way, after it is marked it forms a useful revision aid in itself.

Classroom Debate: Popular Uprising, or Coup D'Etat? (completed teacher version also available)
The format of this debate and the worksheet provided to students is laid out in such a way that it also helps students decide whether methods or conditions were the most important, which is another popular format of question. Students formulate questions against opponents, then debate them in pairs in front of the class. The next pair provides a synthesis conclusion to this mini-debate before moving on to have their own debate. In this way, students can quickly build up a databank of essential arguments and substantiating evidence ready for the essay-writing phase.

How important was the role of Lenin? (PowerPoint images also available)
The debate above is largely framed in terms of the respective contributions of the Provisional Government and the Bolsheviks in precipitating the revolution. This exercise goes further by getting students to consider whether the role of Lenin within the Bolshevik party was crucial. Students do this by researching and considering the importance of Zinoviev, Kamenev, Stalin and Trotsky. In this way they can reach a conclusion about whether Lenin was indeed the 'engine driver' of the revolution or merely a 'passenger' in the process. There is also a useful video clip covering the role of Stalin in particular that can be used here:

Historiography and Essay Writing (there is also a teacher feedback presentation available, as well as a sample timed essay by RJ Tarr)
Three broad schools of historiography are considered and students are asked which of the three most closely matches their own views. They are then provided with three essay questions. Homework is to prepare a plan for each one of them; in a subsequent lesson one of these titles is chosen at random and the class writes an essay in timed examination conditions.

Keyword Checker: How important was Lenin in the October Revolution?
This simple tool allows you (and students) to quickly check how many keywords are used in the essays written by students (if this is the question they attempt). 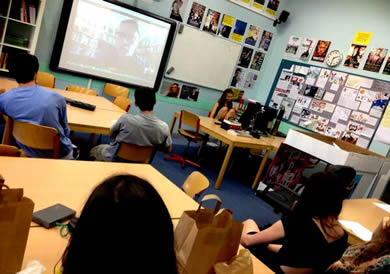 In June 2014, the world-renowned historian Professor Orlando Figes generously agreed to participate in a live video link-up experiment with IB Historians at the International School of Toulouse to answer questions about the Russian Revolutions of 1917. Over the course of 45 minutes he answered a wide range of questions that the class had formulated in advance following an in-depth study of Russian history c.1894-1917.

This initiative followed an email discussion I had with Professor Figes about the best way of enabling professional historians to share their enthusiasm and expertise with students in schools who are about to apply to university.

We used Google Hangouts to conduct the Q&A session. As a first attempt the experience was enjoyed by all concerned, although there are aspects which we will improve the next time we host a similar event (e.g. ensuring a strong and stable internet connection, and having the camera focused on the whole class rather than individual questioners to create more of a 'seminar' feel).

The link to the full video can be found here.