Paper One of the IB History syllabus in a sourcework paper lasting one hour.

For full details about Paper 1 options and associated resources on ActiveHistory, click here.

The second case study explores protests against apartheid in South Africa. It focuses specifically on the years 1948-1964, beginning with the election of the National Party in 1948 and ending with the imprisonment of Nelson Mandela and his co-defendants following the Rivonia trial in 1964.

I teach this topic at the start of Year 12 as per my new IB History curriculum map.

I am always keen to spot overlaps between topics and papers to keep the pressure of content coverage to a minimum. I am therefore thinking of using the South Africa case study in Paper 2 as well as an example of an 'Authoritarian State'. I'll think more about this. Similarly, if I can take the story forward to cover the end of apartheid, then this would end the topic on a high note and provide students with a possible question in Paper 2 ('Evolution and development of democratic states').

Overview of South Africa before 1948

Students are provided with a detailed timeline of events which enable them to answer key questions about the development of South Africa before the formal establishment of apartheid in 1948.

Empathy exercise: Understanding the Broderbund and the ANC
Supporting material: 1944 ANC Youth League Manifesto | 1948 National Party Platform
"In 1912 the Afrikaner Broderbund was established to protect the rights of White Boers. In 1918 the ANC was established to protect the rights of Black South Africans. Produce a press statement from each organisation dated 1944 which outlines why each group felt that it had become necessary and what its objectives are".

Factual Test | Teacher Answer Sheet
This 20 question, paper-based test is provided in the form of a 'fill the gaps' exercise. When completed and corrected, it forms a useful revision aid in itself.

The estabishment of Apartheid 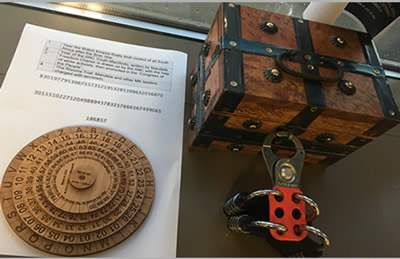 "It is 1966. You are anti-apartheid fighters who have been captured after being in hiding since the Rivonia Trial of 1964. Following the assassination of Prime Minister Verwoerd, you have been discovered and placed under house arrest following a dawn raid by the police. You have been left under the watch of an armed guard while the police have headed back for reinforcements. If you go to trial there is every chance that the terrorism charges against you will result in your execution! Fortunately for you the guard has fallen asleep and it will be 45 minutes before the police return. If you can unlock the box containing the spare key you can make your escape!".

The Apartheid Laws: research, categorisation and prioritisation | Completed teacher copy
"1. Read the details about each Act and use these to complete the second column with the correct titles from this list:
Population Registration Act | Bantu Self-Government / Authorities Acts | Group Areas Act | Bantu Education Act | Separate Amenities Act | Public Safety Act |
2. Two of the ‘details’ cells have been left intentionally blank. Conduct your own research on these to complete the column.
3. Add an appropriate captioned image of your choice to complete the final column. Choose your images carefully.
4. Using the list of apartheid legislation here, identify ONE further piece of apartheid legislation passed before 1965 that strikes you as particularly important. Add a further row into your table to bring your list up to TEN key pieces of legislation."

In Defence of Apartheid

"Watch the following three interviews with people defending the policy of apartheid.
For each one, make notes on their essential arguments. Then, use these to help you produce a speech which will (a) summarise the arguments that have been put forward to defend apartheid by its supporters, and (b) explain why each of these arguments is incomplete and / or inaccurate."

Creative writing task: the experience of Apartheid
Students are provided with THREE possible approaches to this task, one of which is to "Produce a fictional first-person account written by a black South African looking back on their life under apartheid. The account should tell a story which allows you to illustrate the impact of the key apartheid laws. Each time the story is clearly referring to a particular law, add a detailed footnote explaining what the terms of this law were. Keep the story short and focused, but ensure that your footnotes cover a wide and detailed list of key apartheid legislation so that the finished work will be a valuable revision aid".

Factual Test: the Apartheid laws | Teacher answer sheet
A detailed factual test in the form of a 'fill the gaps' exercise. When completed and corrected, it forms a useful revision aid in itself.

The experience and impact of Apartheid

The Sophiatown removals: podcast note-taking task
Students use the BBC Witness Podcast (10 minutes) to answer a series of structured questions, including: Why were the black residents evicted from Sophiatown? How long did the process take, and how many people were affected? How did the Sophiatown get its name? How did this non-white community manage to grow up in this area of Johannesburg, where black residency was usually banned?

One-hour sourcework exercise: The Sophiatown Removals | Model answers written by RJ Tarr
A full sourcework exercise, complete with teacher model answers, based around the following questions:
1. a) According to Source C, why was was there so little resistance to the Sophiatown evictions? [3 marks]
1. b) What message is conveyed by Source B? [2 marks]
2. With reference to its origin, purpose and content, analyze the value and limitations of Source A for a historian studying the reasons why the National Party favoured a policy of apartheid. [4 marks]
3. Compare and contrast what Sources C and D reveal about the lack of resistance to the Sophiatown removals. [6 marks]
4. Using the sources and your own knowledge, evaluate the reasons why there was so little effective resistance to the Sophiatown evictions. [9 marks]

Design a movie proposal: The Sophiatown Removals
Fresh from his triumph with the World War One inspired "1917", award-winning director Sam Mendes is keen to keep his winning streak alive by producing a film based in the black neighbourhood of Sophiatown in the years leading up to and including its destruction in the 1950s. Your job is to come up with a film concept including all of the following key terms and concepts...

Infographic challenge: Apartheid in statistics
"The impact of apartheid on black South Africans is difficult to comprehend. Your task is to take these essential statistics about apartheid and then convert them into an "infographic" (for example, using a tool like Piktochart, Canva, Infogr.am or similar."

Multimedia Teacher-led lecture and decision-making exercise
This detailed multimedia presentation guides students through the development of the anti-Apartheid resistance movement. Through a series of stimulus images, written sources and video clips, students are guided through a series of decision points which reflect the issues which split the resistance movement into different groups and factions including the ANC, the PAC, MK and POQO. The entire activity is likely to take about two hours of lesson time.

Factual Test: The anti-apartheid resistance movement | Teacher answer sheet
A detailed factual test in the form of a 'fill the gaps' exercise. When completed and corrected, it forms a useful revision aid in itself.

Sourcework Exercise: The Sharpeville Massacre | Teacher answers
1) a. According to Source A, why was the campaign in Sharpeville so badly coordinated? [3 marks]
1) b. What is the message conveyed by Source B? [2 marks]
2) With reference to its origin, purpose and content, analyse the value and limitations of Source C for a historian studying the reasons why events at Sharpeville spiralled into tragedy. [4 marks]
3) Compare and contrast what Sources C and D reveal about the objectives of anti-apartheid campaigners in South Africa. [6 marks]
4) Using the sources and your own knowledge, evaluate the view that "Sharpeville was more a tragic accident than a deliberate attempt to shoot black Africans". [9 marks]

Anti-apartheid resistance groups: a detailed breakdown with tasks | Teacher answer sheet
Task 1: Complete the first column with the name of each group, as far as you are able to do so. Then, imagine you have 100 dollars to donate to anti-apartheid groups. Who would you split your donation between? How much would you give to each?
Task 2: Produce a diagram designed to illustrate the similarities, differences, connections and tensions between these various groups for revision purposes.

Students provide answers to the following questions using the first 24 minutes of this podcast from the BBC, which covers Mandela's life up to his imprisonment in 1964.

Rights and Protest: Sample sourcework exercises and model answers in the style of IB

I have already produced a Sourcework markscheme and guidance for students document based on the IB syllabus. I share this with students from the outset of the course and they are encouraged to refer to this regularly whenever we have any sourcework practice assignments.

I am also in the process of producing a series of sourcework assignments which will enable teachers and students to practice their sourcework skills regularly throughout the studies. All of these will be in the style of the IB and I will provide model answers that can be used as follow-up discussion material in class.

For summer reading I recommend the following novels, memoirs and autobiographies for students prior to commencing the course. It would be good to get different students reading different books and then delivering a presentation to the class about what they learned (I might design a standard rubric for all students so we can compare and contrast how well each book deals with particular issues, for example).