By Russel Tarr, author of www.activehistory.co.uk

On Thursday 9th May 2013 I was the subject of an attack by the Secretary of State for Education, Michael Gove, in what’s being called his “Mr. Men” speech. According to Mr. Gove, my approach to teaching is apparently symptomatic of all that is wrong with UK secondary education in general, and history teaching in particular. The following morning I found the story all over the national newspapers including the front page of The Times [image]. Today, Mr. Gove repeated his criticisms on the BBC's Andrew Marr show.

If you want to hear Gove's argument on that show, and hear my reponse to it in BBC Radio interviews later, here they are:

Mr. Gove focuses on a particular activity on my website www.activehistory.co.uk in which students are required to produce children’s stories in the style of the well-known ‘Mr. Men’ books to explain the rise of Hitler. For Gove, this provides irrefutable evidence of the ‘infantilisation’ of history teaching and a 'culture of low expectations' (although as AaronStebbings puts it, "I imagine Michael Gove would have a go at George Orwell for using farmyard animals to explain the rise of the Soviet Union").

Gove and his advisors - either through stupidity or mischievousness - failed to place me, my website, or the lesson into its appropriate context. His criticisms betray a lack of knowledge, understanding, and interpretation that would make a GCSE History student blush with shame. Ironically, given Mr. Gove's supposed commitment to rigorous academic standards, it appears that much of his research comes from dodgy marketing surveys from Premier Inn and UKTV Gold (I kid you not)!

Moreover, other commentators have inferred that these books address "Nazi Germany" and thereby repackage World War Two and the Genocide into bedtime stories for primary school children. Not so. To clarify, I do not teach the Third Reich - with all its attendant horrors - through children’s storybooks. The actual topic in question is “The Weimar Republic 1918-33” with a focus on why democracy failed in Germany after World War One: in other words the topic does not begin, but instead ends, with the declaration of the Third Reich. This is not a 'lesson about Hitler' in that sense and I think this is an important point.

General Points about the website Mr. Gove is attacking, and its author

This week has been the strangest of my professional career, not least because until today I was away on holiday with my family and unable to respond effectively apart from a couple of minutes on the phone with a Press Association correspondent and a few status updates on Twitter. In my absence I was barraged with scores of supportive emails and messages of support on Twitter from fellow professionals. I would like to offer a genuine and heartfelt *THANK YOU* to everyone who offered kind words.

For anyone out there who still doubts the literary power and gravitas of the Hargreaves canon, I humbly suggest you take a read of this page of Mr. Men Amazon Reviews.

And just in case you're reading, Mr. Gove, I'd be more than happy to engage in a direct debate if you are ever interested in shedding your reputation as "Mr. Point". Maybe you can even come and provide me with a few tips in how to engage youngsters in school? From this clip, it really does appear that you do indeed "have every right" to tell classroom practitioners how they should be doing their jobs.... :)

One week on: My update and developing thoughts on the "Mr. Men Wars"

During this week’s Education Select Committee meeting, Mr Gove was asked whether - given his supposed commitment to rigorous academic standards - he had any reservations, on reflection, about the way in which his “Mr. Men Speech” had been researched (about 4m into this clip). Predictably, perhaps, he maintained that his attack was justified: but not, however, by addressing any of the numerous misrepresentations made against me in my original web post (see below). Instead, he avoided the substantive criticisms outlined below and instead pointed out - as if it was of any relevance whatsoever - that the ‘striking’ facts were that no-one had challenged his assertions that (a) the resource was aimed at 15-16 year olds, and (b) that my website www.activehistory.co.uk was a very popular resource with UK teachers. So what? Nobody challenged the fact that he made the speech wearing a suit either - perhaps because it was irrelevant to the debate. This was a classic 'straw man' response.

He additionally claimed that ‘opinion was divided’ on whether it was a good lesson strategy or not. This is Govespeak for “I and a small minority of bloggers I choose to listen to have one view, whereas the vast majority of other people with an opinion express the opposite”. What evidence do I have of this, you may ask? Well, just read the comments under any newspaper web article dealing with the “Mr Men” affair. From The Guardian on the one hand to the Daily Mail on the other, the overall impression across the political spectrum is that Gove is out of step with general public opinion (see too the results of the Guardian Poll). More specifically, within my profession I received over 100 email messages, some running over 1000 words, expressing their outrage with Gove’s policies. Moreover, one evening last week I suggested that teachers who did not agree with Mr. Gove could change their Twitter profile image to a Mr. Men character. Within a few hours upwards of 500 people had done so, many sending heartfelt tweets of support as they did so. Has there been any similar groundswell of support similar to this in Gove’s favour? Hardly.


In one evening, upwards of 500 people changed their Twitter image to express opposition to Mr. Gove

I really don't mind that Mr. Gove chose to single my resources out for criticism. His points were so flimsy that rebutting them had all of the academic challenge of competing with a Year 7 student in a school debating society. Instead, the really unfortunate thing about this saga is that the ensuing debate has descended into a pointless battle between "traditionalists" on the one hand, "modernisers" on the other or - in twisted Conservative parlance - "high standards" versus "dumbing down". In terms of history teaching, this is expressed in terms of a "fact-based, teacher led" curriculum versus an "interpretation-based, student-centered" one. However, I argue that this is a false dichotomy. It is not possible to form valid interpretations without facts, so the "modern" approach is necessarily the inclusive and open-minded one. However, it is certainly possible to simply require students to cram more and more politically-selected names, dates and places into their heads without demanding that they develop interpretative and evaluative skills at the same time.

This latter approach, clearly favoured by Mr. Gove and his supporters, would merely produce a generation of people unable to research properly, unable to debate effectively (as outlined above), and unable to listen to any views other than those narrowly nationalistic perspectives drilled into them from an early age and which they have decided are the only ones worth hearing.

A generation, in other words, created in Gove’s own image.

Guardian: Give us the Mr Men version of history

Mr. Gove - NOT by Roger Hargreaves 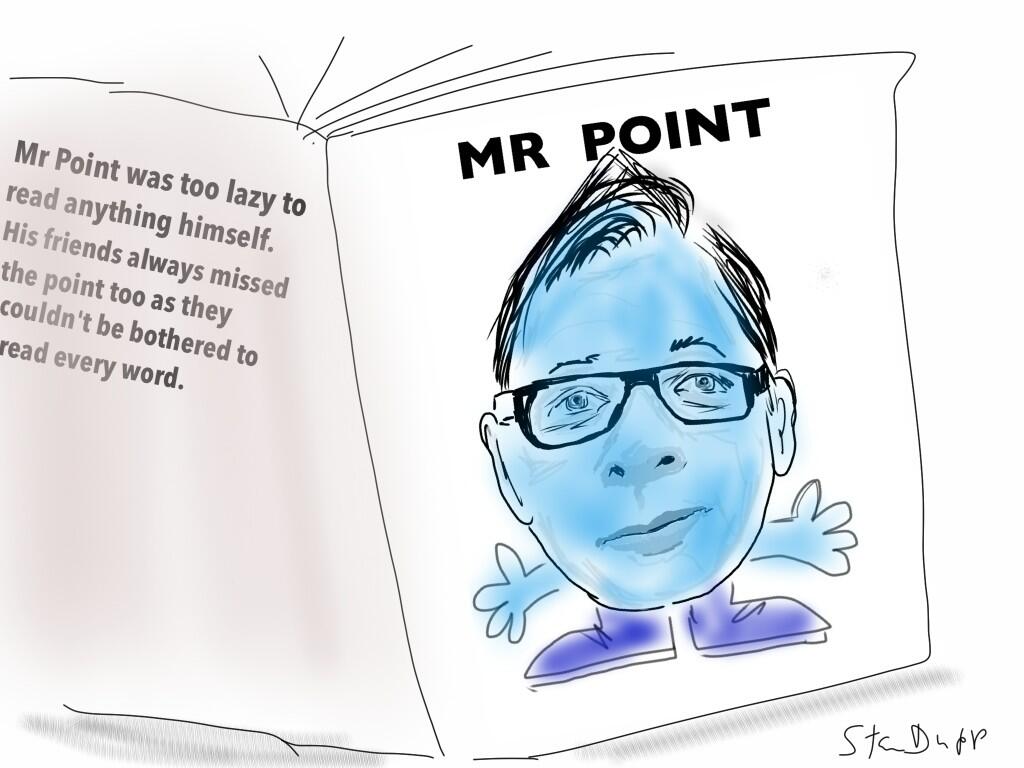 Cartoon to the left by @SDupp