Impact of WW1 upon Russia

"Analyse the significance of World War One for Russia"

The following unit is designed to provide IGCSE History students with a series of lessons which will enable them to answer the key question in the form of a 2000-word coursework essay. For much more detailed resources, you should consult the following additional pages:

The Coursework assignment: "Analyse the significance of World War One for Russia"

In this essay (2000 words maximum), we will consider to what extent the Russian Revolution and its legacy was the direct result of World War One. We will do this by considering each of the following questions in turn:

A. How stable was the Tsarist regime on the eve of World War One?

B. What was the immediate political, military, and socio-economic significance of World War One upon Russia?

Regardless of whether the war was a cause or merely a catalyst for the February Revolution, it certainly had a significant immediate impact upon Russia. The issue which divides historians in this respect is explaining how military and socio-economic developments during the war were connected together.

Main task: What was the impact of World War One upon Russia up to February 1917?
There is also an extension activity focusing on the accuracy of the film "Rasputin", clips from which are incorporated into the main activity.

Video (above): What is AJP Taylor's typically quirky explanation of how the war contributed to the downfall of the Tsarist regime?

C. Was the October Revolution a coup d'etat or a popular uprising? 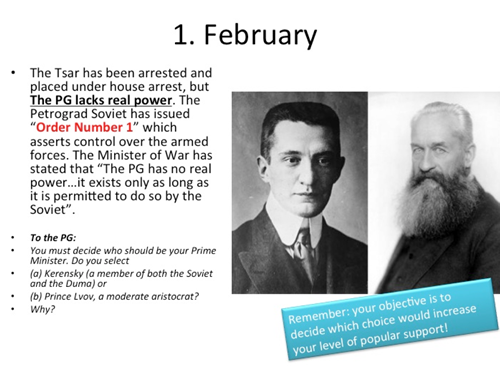 Timeline Roleplay Exercise (interactive exercise using the Online ActiveHistory Presentation).
In this exercise, students are asked to start organising evidence under four headings: (a) Provisional Government mistakes/weaknesses; (b) Bolshevik mistakes/weaknesses; (c) Provisional Government strengths/successes; (d) Bolshevik strengths/successes.
The teacher will use this Online ActiveHistory Presentation to guide students through the key events between February and October. Each slide presents a fresh development, and students discuss and then vote on what they think the relevant party (Provisional Government or Bolsheviks) should do in order to increase their popularity. This is then compared to what really did happen so that students can then determine under which heading they should place their notes.
This is a highly effective and efficient way of getting students engaged with, and reflecting on, the key events in a step-by-step manner as a starting point.

Primary / Secondary Source Material
As the next phase of the investigation, students read through a series of selected primary and secondary accounts of the events of October 1917 and decide where each can be used, and which quotes are best to include. They should also be encouraged to reflect on the values and limitations of each of these sources.

D. How far can Stalin's rise to power be explained through reference to divisions in the party caused by WW1?

Assessing the impact of the war upon Russia also requires us to look to the long-term. In this sense, the first thing to consider is the immediate impact upon Russia of Lenin's decision to pull out of the war through the Treaty of Brest Litovsk.

The teacher will use this Online ActiveHistory Presentation to guide students through the key events and debates surrounding why Stalin was able to rise to power. There are several theories to explain why Stalin, who was a relatively anonymous figure at the time of the October Revolution, eventually became leader of the Soviet Union after the death of Lenin in 1924. These can be summarised as follows:

We will consider these various theories to help us answer the question "How significant was the experience and legacy of World War One as a factor in helping Stalin rise to power as leader of the Soviet Union?"

E. To what extent were Stalin's policies a direct attempt to protect Russia from the threat of another World War?

In the longer-term, the experience of World War One and the ensuing civil war which followed in its wake was used by Stalin to justify radical actions to protect the country against future threats. The teacher will use this Online ActiveHistory Presentation to cover the following themes:

At this point, students are ready to write their coursework essay. This document - guidance for writing the coursework essay for students - outlines how to write an introduction, a conclusion, and provides a range of key words and phrases to help them analyse significance. It also makes use of the ClassTools "Essay Writing Bookmark" which I have made freely available for download here.