1. The Background to World War Two

The Causes of World War Two is a topic better suited as an examination topic for older students, and resources can be found here: 1920s | 1930s.

Therefore, the following lessons focus on providing students with a clear understanding of the main ideologies, personalities and events leading up to the war rather than the causes themselves.

Overview of Ideologies: [a] Communism, Fascism and Nazism

Students start the unit by being introduced to the main ideological divisions of the interwar period and the key personalities behind them, including Hitler, Mussolini, Stalin, Roosevelt and Churchill.

Left-wing and Right Wing: Which are you? [online simulation]

Students then complete this computer questionnaire, which will provide them with some initial suggestions about whether they are Left- or Right-Wing. This can be completed in class, or set as a homework activity. Students are then asked to complete a Triangle Nine Template by completing the following steps: "Step 1: COPY the 9 statements you agreed with from your table and PASTE them into the diagram - but Organise the statements you agree with most strongly towards the TOP of the diagram, and the statements you are less bothered about towards the BOTTOM. Step 2: Colour Left-wing statements in RED and Right-Wing statements in BLUE. Step 3: Give your diagram a title: "The political profile of [YOUR NAME]". 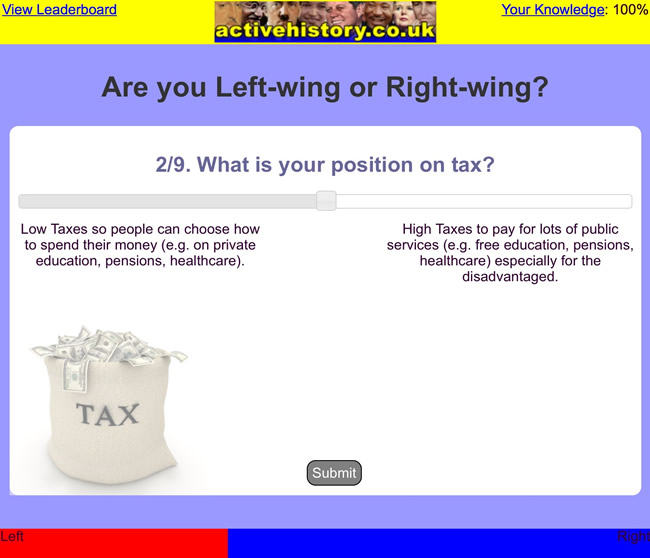 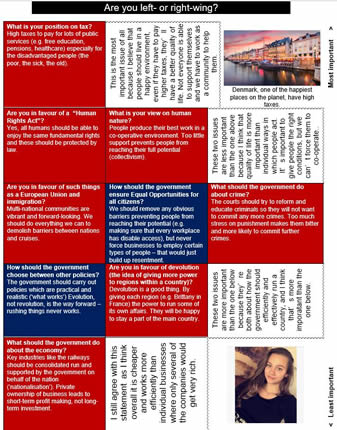 2. Who were the Nazis? Why was it so important to defeat them?

Multimedia Presentation: Who were the Nazis? | Student Worksheet

Students consider some of the key beliefs of the Nazis by debating a series of controversial issues (e.g. "Immigrants should be encouraged to leave our country when there are lots of our own people who are unemployed", "It is quite right to place suspected terrorists into detention centres while awaiting trial if the government thinks they pose a threat to the safety of the people" etc) before being told (using the presentation) what the Nazis felt about them. In the second part of the worksheet, particular consideration is given to why and how the Nazis were so obsessed with persecuting the Jews.

This worksheet is designed to help students get the most out of a documentary episode which is widely regarded as one of the best ever produced about the Holocaust - Hitler's attempt to exterminate the Jewish people. The Holocaust is a subject which is compulsory to study in many countries before the end of Grade 8 because it provides a crucial - if unavoidably disturbing - example about how easily racial prejudice can take root in a civilised society and the devastating results which can follow. A study of the Holocaust also stresses how critical it was to rid Europe of Nazism and why the sacrifices of those who fought against Hitler in World War Two was so important.

This is a documentary telling the forgotten story of a heroic battle fought by the children of the British Memorial School to help liberate Europe from the Nazis. The school served a unique community of ex-First World War soldiers and their families living in Ypres in Belgium who lovingly tended the war graves. Steeped in ideals of patriotic service and sacrifice, many pupils and ex-pupils refused to surrender to the invading Nazi forces. Three surviving school pupils tell their extraordinary stories of resistance, illustrated with rare archive film.

A major decision-making simulation designed to teach students about the major events of World War Two in an engaging but rigorous manner.

"In 1939, Adolf Hitler invaded Poland after signing a non-aggression pact with Stalin’s USSR. Britain and France declared war on Germany. The British quickly sent their army to France to help defeat the Nazis. In May 1940, Winston Churchill became British Prime Minister. Your teacher will start by reading through the first slide in the online presentation. Use this to complete the gaps in the account in the first row. Next, consider which of the two options you would advise Churchill to take. Divide 10 points between each of these options to show how strongly you support each one (e.g. 8-2, 3-7, etc). You will then be told what happened. Highlight this option in bold to indicate that this is what Churchill decided to do. Write further details into the 'What actually happened?' column. At the end you should add up how many points you gave to Churchill. You will then have a clearer idea about the main events of the war, and what you think of Churchill’s leadership".

How successfully would you have been as a wartime leader of Britain?